Foreign Direct Investment (FDI) is permited as under the following forms of investments.
Through financial collaborations.
Through joint ventures and technical collaborations.
Through capital markets via Euro issues.
Through private placements or preferential allotments.
Forbidden Territories:
FDI is not permitted in the following industrial sectors:
Arms and ammunition.
Atomic Energy.
Railway Transport.
Coal and lignite.
Mining of iron, manganese, chrome, gypsum, sulphur, gold, diamonds, copper, zinc.
Foreign Investment through GDRs (Euro Issues) :
Foreign Investment through GDRs is treated as Foreign Direct Investment Indian companies are allowed to raise equity capital in the international market through the issue of Global Depository Receipt (GDRs). GDRs are designated in dollars and are not subject to any ceilings on investment. An applicant company seeking Government's approval in this regard should have consistent track record for good performance (financial or otherwise) for a minimum period of 3 years. This condition would be relaxed for infrastructure projects such as power generation, telecommunication, petroleum exploration and refining, ports, airports and roads.
Clearance from FIPB
There is no restriction on the number of Euro-issue to be floated by a company or a group of companies in the financial year . A company engaged in the manufacture of items covered under Annex-III of the New Industrial Policy whose direct foreign investment after a proposed Euro issue is likely to exceed 51% or which is implementing a project not contained in Annex-III, would need to obtain prior FIPB clearance before seeking final approval from Ministry of Finance.
Use of GDRs
The proceeds of the GDRs can be used for financing capital goods imports, capital expenditure including domestic purchase/installation of plant, equipment and building and investment in software development, prepayment or scheduled repayment of earlier external borrowings, and equity investment in JV/WOSs in India.
Restrictions
However, investment in stock markets and real estate will not be permitted. Companies may retain the proceeds abroad or may remit funds into India in anticiption of the use of funds for approved end uses. Any investment from a foreign firm into India requires the prior approval of the Government of India.
Posted by know what you own and why you own! at 12:29 PM No comments:

1) The first bank in India to be given an ISO Certification
Canara Bank
2) The first bank in Northern India to get ISO 9002 certification for their selected branches
Punjab and Sind Bank
3) The first Indian bank to have been started solely with Indian capital
Punjab National Bank
4) The first among the private sector banks in Kerala to become a scheduled bank in 1946 under the RBI Act
South Indian Bank
5) India's oldest, largest and most successful commercial bank, offering the widest possible range of domestic, international and NRI products and services, through its vast network in India and overseas
State Bank of India
6)India's second largest private sector bank and is now the largest scheduled commercial bank in India
The Federal Bank Limited
7) Bank which started as private shareholders banks, mostly Europeans shareholders
Imperial Bank of India
8) The first Indian bank to open a branch outside India in London in 1946 and the first to open a branch in continental Europe at Paris in 1974
Bank of India, founded in 1906 in Mumbai
9)The oldest Public Sector Bank in India having branches all over India and serving the customers for the last 132 years
Allahabad Bank
10) The first Indian commercial bank which was wholly owned and managed by Indians
Central Bank of India
Posted by know what you own and why you own! at 11:55 AM No comments: 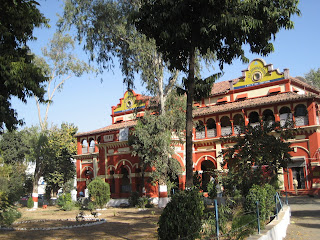 ALLAHABAD BANk (An Overview)
Allahabad Bank, established in 1865, is the first fully Indian owned bank of India. It is an Oldest Joint Stock Bank of the Country, which was founded on April 24, 1865 by a group of Europeans at Allahabad. At that juncture Organized Industry, Trade and Banking started taking shape in India.
But at present, banks are passing through a very interesting phase; there is a transition from banking to financial services. As this is an age when the world has become a global village and money can move as quickly as information; thus, meeting world requirement has become a huge challenge for international players. So, banks are uniquely poised to broaden their product lines into complete offerings that would go under the rubric of financial services. But underlying this is the need to have sound fundamentals. There is no doubt that only those banks/financial institutions, which are focused on efficiency; productivity and profitability, have a chance to survive in this highly competitive market because now-a-days, banking is not just confined to acceptance of deposit for purpose of lending, it refers to intermediating and managing risk.
Allahabad Bank has been actively and efficiently participating in this present competitive financial market and its success is evident from the following:
October 2002: The Bank came out with Initial Public Offer (IPO), of 10 crores share of face value Rs.10 each, reducing Government shareholding to 71.16%.

October’2006: Rolled out first Branch under CBS, now we have 18 CBS branches.

know what you own and why you own!